A few months ago, I met this really awesome guy. He's cute, funny, intelligent, kind, genuine, hard-working, and gorgeous to boot. Also, he's in med school, so he'll be raking in the dough (hopefully). We seem to have a lot of chemistry, he's admitted to really liking me, and we text/call each other every day. Sounds perfect, right? 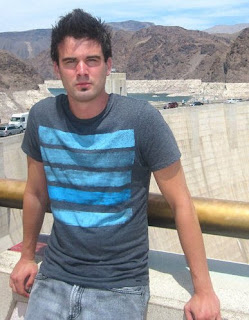 Rawr...
The only problem is that he lives six hours away. Now, don't get me wrong. He's not an online boytoy creeper I've never met before; we've spent quite a few weekends together, and oh what wonderful weekends those were.
Having a long-distance relationship where the 'long-distance' part won't end until one of us graduates is impractical and illogical, but if it weren't for us explicitly deciding not to label our relationship, we would be boyfriends.
This is ridiculous though. Long-distance relationships are only good for people who are in love with each other, and nothing will come of what he and I have. At my age, a LTR probably isn't the best idea anyway.
I feel as if I should cut my losses and back out of this before I fall too hard for him. I've already started experiencing bouts of jealousy whenever a cute boy writes on his Facebook wall.
Posted by Twinky Chink at 11:42 PM 7 comments: 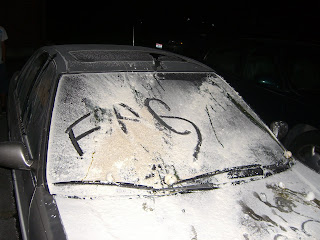 My roommate's car was doused with eggs, flour, oatmeal, corn syrup, and all other sorts of breakfast foods, with the word "FAG" scrawled into the mess the night that Prop 8 was overturned.
On the hood, it looks as if they wrote "F*cken stop;" I'm not sure if it's referring to Prop 8 or my roommate's sexuality.
Firstly, if you're going to hate crime somebody, at least do it right. Spell-check the damn thing, why don't ya?
Secondly, I'm not sure how they knew whose car was the gay one. I guess we should stop emitting those rainbow gases from the exhaust, eh? In any case, we're locking all our doors every night, and I've started sleeping with a knife under my bed.
Just in case. 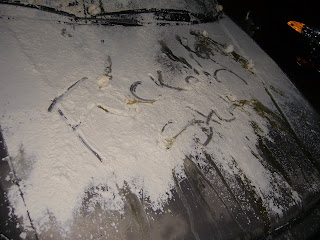 To Catch a Cheater 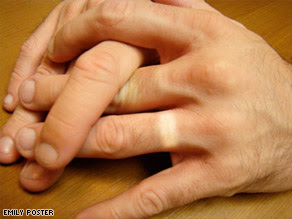 I blame my recent lack of posts on the going-ons we've been having in the Big Gay House. Here's one especially interesting adventure, brought to you by Boskers and yours truly:
A few months ago, my friend brought over a compulsively lying, married BYU student to our apartment, aware that I knew this man's name wasn't really "Greg," that he wasn't really single, and that he wasn't practicing abstinence when it comes to other men, all of which he was claiming to be to my friend.
So, what did I do? I came downstairs, loudly saying, "Oh, hello KENDON. How are you doing?"
I saw his eyes widen, and he said, "My name's Greg. You must have me confused with someone else."
"Oh, alright 'Greg,' (I used my fingers to quotation mark his name) How's the married life treating ya?"
"I'm not married."
"Riiiiight..." (as I started to log online to the emails we had exchanged about a year ago)
"There's a guy who looks exactly like me. People confuse us all the time."
"Huh. Well, it was nice seeing you again GREG." And with that I went upstairs, leaving Greg/Kendon with my friend and my roommates.
Unsurprisingly, he left about five minutes later, mumbling something about having to help his friend with something. The next day, he sent me a few nasty emails for calling him out on his lies.
I suppose I should have felt bad for doing something so beyotchy and keeping him from having his way with my friend. However, I feel somewhat justified because "Greg" was trying to seduce me when I was 17 while his fiancee was out shopping for her wedding dress.
I don't really have any respect for those kinds of guys, who enter a marriage already cheating, and knowing that they will cheat during the relationship. It's one thing to struggle with homosexual feelings and not being able to figure things out until marriage, but what "Greg" was doing was a different matter altogether.
Posted by Twinky Chink at 10:47 PM 9 comments: 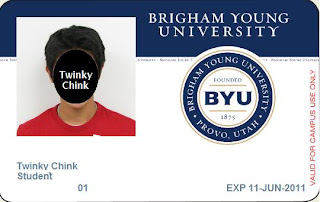 After pondering the reasons for me being single, I've come to the realization that nobody takes 18-year-olds seriously -- and with good reason too. I resist dating boys my age for the same reason that guys resist dating me. Us teenagers carry the stigma of immaturity, and no one wants that in a relationship. Before I turned 18, I thought that once I reached the legal voting age, I would be given some credit in society, but it turns out that even 21 is deemed to be young and deficient of life experiences.
I searched on Connexion for gay boys between the ages of 18 and 19, and came up with 5 hits in Provo... One of them my 34-year-old friend pretending to be younger. I attribute the few numbers to inner turmoil and missions. Few gay men, especially here in Utah Valley, come to terms with themselves at such a young age, and for those that do, few know what they want in life.
Because of all this, I've decided to put dating on the back-burner and focus more on making friends and continuing my education-- at least until I pack on a few more years and lose the pesky "1" as I approach my 20's. That isn't to say that I'll give it up entirely; I just won't be too date-crazy for a while.
Posted by Twinky Chink at 4:51 PM 4 comments: 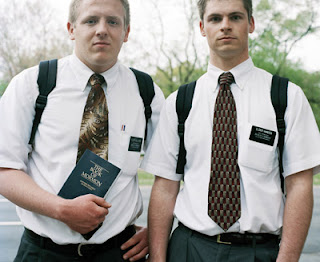 Today was Fast and Testimony Meeting in Sacrament. This last weekend was also Missionary Bootcamp, which I (thank God) was able to opt out of because of our family vacation. Unfortunately, the future missionaries in our ward marched up to the podium, one by one, to deliver their testimonies about what an amazing and spiritual experience they had over the past few days. I looked over at my mom, whose face grew more and more sour with each heartfelt message.
Afterwards, she turned to me and whispered, "It's hard for me to watch these young men and know that I won't have the same honor their parents do. I'm still not giving up hope for your mission."
My stomach twisted into a knot. How was I supposed to respond? "Don't," I said, "You're only setting yourself up for disappointment."
"You don't think I'm already disappointed?" And with that, she turned back to the speaker.
Then, between sessions, this lady in our ward I hardly know came up to me. "I know it's none of my business, but you need to go on a mission," she said intently. Before I could tell her to bugger off, she went on a tirade of how much it blessed her son's life and her life and blah blah blah...
I know this is just the beginning. I haven't even turned 19 yet, and already people are on my case about my decision. I can't imagine how many more times I'll have to explain myself over the next two years and how many persistent exhortations I'll have to fend off.
On a happier note, I'm moving into an apartment with 3 bisexual guys tomorrow, so at least I'll be able to avoid an earful of this tiresome missionary talk in my own home.
Posted by Twinky Chink at 3:31 PM 8 comments:

Why Closet Cases Remain So

Last week, one of my friends from high school called me unexpectedly when I was on my way to work. She's an intelligent, albeit close-minded, Mormon who is betrothed at the ripe age of 19.
In a nutshell, she saw a post on some guy's Facebook wall about him wanting to go on a second date with me. I thought that I would have to come out to her right then and there while marching up the steps to BYU campus. Fortunately, I was able to quickly make up a story about how there must be some confusion after he and I had grabbed food at McDonald's one time.
Then, my friend said something along the lines of, "Why are you hanging out with these people? I don't want you hanging with the wrong crowd. You're easily impressionable. I mean, he's gay."
I have a few issues with this:
Granted, she's still a teenager, so I can't expect her to handle a situation like this with the maturity of say, a parent, but she should have taken a less accusatory stance and reprimanded less even as a friend.
I completely understand now that I will not be coming out to her anytime in the near future... Unless she "stumbles" upon some more incriminating Facebook information.
Posted by Twinky Chink at 2:24 AM 4 comments:

While I wait for my next housing contract to start, I moved back home for the next month or so, where I get free food, the use of a vehicle, and free laundry facilities!
Along with wireless internet that works about half the time, a room that feels like an icebox, and a midnight curfew. MIDNIGHT.
Oh yeah, and there's a drum set where my bed used to be.
Despite all that, I love my family, and I was very glad to be back home for a little bit, but those good feelings didn't last too long. Usually, it only takes a few days, but this time, my mother and I managed to go a week before exploding our emotions all over each other in a barrage of accusations and tears. 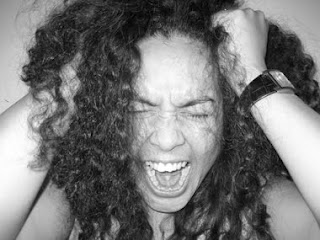 My mom and I are very close. We are very similar in that we are both stubborn as rocks, and very different in that she believes that I can "pray out the gay." She's fully aware that my faith in the church is dwindling, and that just fuels her desire to push me towards spiritual activities.
For example, today she wanted me to give my father a priesthood blessing (no way in hell I'm worthy to do that), and she wanted to enroll me in a missionary boot camp for a few days this summer.
Hence the explosion.
Posted by Twinky Chink at 11:55 PM 3 comments: